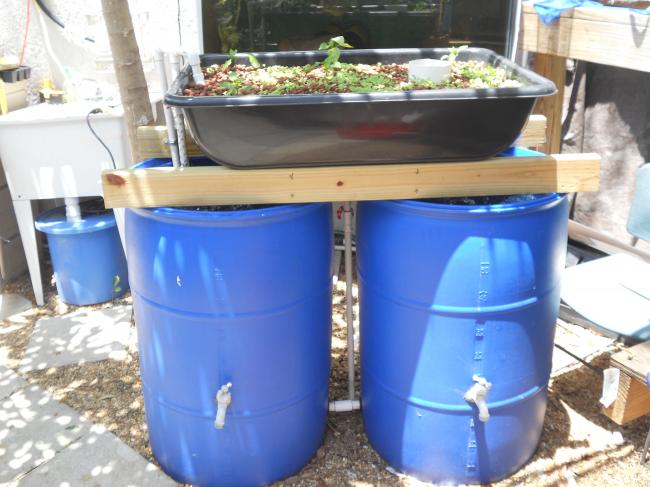 Sahib introduces an AquaVermiponics system  in order to have a quality supply of ‘casting tea”, also known as “compost tea” always available for foliar spray for his Aquaponically grown plants and produce. So what is Aquavermiponics?

Aquavermiponics is the combination of Aquaculture, Hydroponics and Vermicomposting. How Vermicomposting is added to Aquaponics can vary to some extent as to the need for the particular application. Why add Vermicomposting to the better than organic method of growing food using Aquaponics? To answer this one has to know a little about both Aquaponics as well as Vermicomposting. In Aquaponics, there can be no harmful pesticides or chemical fertilizers added to the system. Even products that are approved for use in organic gardening can result in disastrous consequences if added to an Aquaponics system. Take Neem Oil as an example.

Being from Indian Ancestry, naturally I am familiar with the many beneficial qualities that Neem Oil offers such as being a natural insect repellent and a safe pesticide that is organically approved. It has been found to be effective in controlling such pests as  white flies, aphids, scales, mealy bugs, spider mites, locusts, thrips, and Japanese beetles. Neem Oil is also biodegradable, breaking down quickly and it is also considered to be non-toxic to mammals, birds, bees or earthworms. Neem Oil is certainly a wonderful product in organic gardening if used correctly.

Severe caution: Do Not Use Neem Oil in Aquaponics! Foliar spraying Neem Oil, while helping you control the pests mentioned above could result in the death of all your fish. Why risk such?

So I was looking for an alternative foliar spray product that would not only help in controlling the pest issues but also help in providing additional nutrients and trace elements to the plants growing in our Aquaponics systems. We have been spraying Maxicorp with iron on occasions as well as Vermicompost tea with excellent results. We do not always add the worm castings directly to our media beds (we may if they are wicking beds), but prefer to use foliar spray. Why? We had read and do believe that plants absorb the beneficial aspects far quicker as a result of foliar spraying. As every sustainable urban farmer knows, Vermicompost is a wonder product in the world of agriculture. It use is increasing rapidly as the numerous benefits are being shared with each other. Here is some information as well as the source:

Castings contain: 5 times the available nitrogen, 7 times the available potash and 1 1/2 times more calcium than that found in 15 cm of good top soil. Therefore, castings are supplied with available nutrients. The nutrients are also water soluble and immediately available to plant life. You will find that most potting soils have nutrient life of 2-5 days, where worm castings will last up to 6 times as long as other types of potting soils. You will need 5 times as much potting soil to do the same job as the worm castings. So, in the long run, worm castings are much cheaper and do a much better job. Also, castings hold 2-3 times their weight in water. That means you water less and the pot will stay damper for a longer period. Worm castings will not burn your plants; unlike using any fresh raw manures (cow, horse, etc.) which can burn root systems if it is not applied properly. The advantage of using castings is the manure passes through the worms' digestive system producing rich organic plant food and a slow releasing fertilizer that allows for better growth. Kids for Landcare: Wormwatch, Education Department of South Australia, 1992, p. 35.

A worm casting (also known as worm cast or vermicast) is a biologically active mound containing thousands of bacteria, enzymes, and remnants of plant materials and animal manures that were not digested by the earthworm. The composting process continues after a worm casting has been deposited. In fact, the bacterial population of a cast is much greater than the bacterial population of either ingested soil, or the earthworm's gut. An important component of this dark mass if humus. Humus is a complicated material formed during the breakdown of organic matter. One of its components, humic acid, provides many binding sites for plant nutrients, such as calcium, iron, potassium, sulfur and phosphorus. These nutrients are stored in the humic acid molecule in a form readily available to plants, and are released when the plants require them. Mary Appelhof, Worms Eat My Garbage, 1982, p.68.

Worm Castings also contain trace minerals, such as small amounts of Phosphorus and Potassium, Iron, Calcium, Magnesium, Sulfur, Boron, Copper, Zinc and Manganese. There are two ways to obtain the solution, what we call “compost tea”, for the foliar spray. One is to brew the compost tea by merely soaking a bag of worm castings in water for some time and using this spray solution, a weak “compost tea” – the extracted method. The other, and one that I prefer, is known as the “aerobically” method.

In the brewing method, compost/castings are placed into a container of circulated and aerated water (via an air bubbler or similar system) typically with other nutrients.  The circulated water extracts the microbiology and the microbes are in an abundance of both oxygen and nutrient to feed upon.  In this method, colonies of microbes are brewed in exponential numbers, a colony of bacteria for instance can double in population every 20 minutes.  Aerobic brewing takes longer than basic extraction with common brewing times of 12 to 24 hours.  Brewing time is very dependent on water temperature with warmer water creating faster brews.  Aerobically brewed teas have much higher microbe population densities than extracted teas and for this reason are the tea of choice.  The sign of a good aerobically brewed tea is a good head of foam and scum on top signifying healthy microbe action!  https://www.yelmworms.com/compost-tea/page3.htm

As we have increased the growing area in our Aquaponics research farm, we require an increased quantity of the aerobically brewed compost tea. This compost tea takes at least a couple of days to make and only has a limited shelf life (try use within 12 hours if possible). We have designed an Aquavermicponics system that will ensure that we will have the aerobically brewed compost tea available on hand at all times. In our system, we can also experiment by adding such wonderful natural products as Molasses, thus adding additional nutrients for excellent and robust natural plant growth. Prior to using such this incredible powerful and magical “Sahib Compost Tea”, one could add just a few drops of “hot sauce” and/or cinnamon juice extract so as to increase the potency of the solution. Do remember that you should only spray when temperatures allow and when not harmful to beneficial insects such as honey bees and lady bugs. Here are a few pictures of our Sahib’s Aquavermiponics system. We have added a media bed with a modified Affnan bell siphon so as to increase aeration.

You are welcome to share your ideas and designs as to how you would suggest we increase additional growing space and/or make improvements. You can submitt them tosahib@sahibaquaponics.com.