Recirculating Farms- Helping to Provide Food for the Homeless and Hungry

Recirculating farms are a socially responsible farming method and business: they support the use of renewable energy, recycle water and waste, and provide local food, (and can do it without chemical pesticides). They also can create green jobs. This highlights how farms are not only increasingly supplying restaurants and grocery stores with food, but also are helping to feed the homeless, and others that don’t have access to fresh, healthy food around the world.

Recirculating farms are land-based farms that use clean, recycled water in place of soil to grow plants (hydroponics), fish (aquaculture) or plants and fish together (aquaponics) in a contained system.

Innovator Martin Wiggett, founder and president of Stealth Hydro, and his wife Julie, are using hydroponic technology to have a positive social impact and feed hungry people all over the world. They support organizations such as Hydro for Hunger and Growing Hope. The Hydro for Hunger program focuses on raising awareness about global food shortages. Growing Hope encourages communities to be self-sufficient.

As another example, Sahib Punjabi uses space behind a strip mall in Florida to grow food for his community. His aquaponic project feeds the homeless and local families nearby. Sahib uses his knowledge to help build other aquaponic facilities like his, all over the world.

These are just a few examples of how recirculating farms are changing the world. Many farmers who embrace this method of growing food are also focusing on using it to have a positive impact for people and our planet. I encourage you to learn more about recirculating farms to see how they can help you and your community – and join in the good food revolution! 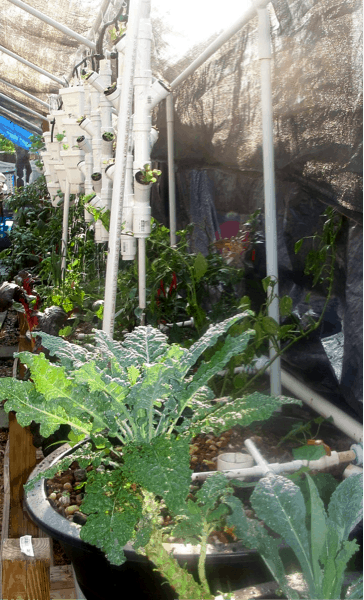 Center for a Livable Future

The United States needs better food systems, and it needs more jobs. Aquaponics, a relatively new type of urban food production model, can give us both—sustainable food and green jobs.

Currently, the U.S. imports about 85 percent of our seafood, a large fraction of which is produced in overseas fish farms, by a process called aquaculture. Another 10 percent is “domestic wild catch,” which is made up of seafood caught by U.S. fishermen (NOAA). The remaining 5 percent comes from U.S. aquaculture.  As global wild catch declines, aquaculture is steadily increasing as a viable replacement, although some aquaculture operations are criticized for being sited in open water or rivers, where fish escapes, exchange of fish diseases between farmed and wild fish, and environmental pollution are of concern.

But there is a different approach to aquaculture that addresses many of these concerns: aquaponics. Aquaponics is typically land-based, closed-system farming that is designed with the principles of agroecology in mind— fish species and vegetable crops are raised together in harmony— because fish waste serves as liquid plant fertilizer and plants strip the water of chemicals that are harmful to fish.

Agroecology, a method for integrating biological systems into agriculture, is widely recognized as a potential solution for increasing farm productivity and environmental sustainability of agriculture. Olivier De Schutter, UN Special Rapporteur on the Right to Food, is strongly in favor of the agroecology approach, in which farmers create “complex farming systems that replicate the complexities of nature.”

Today, fish such as tilapia, yellow perch, blue gill, and catfish are being raised in aquaponics systems in urban settings across the U.S.

Aquaponics systems recycle as much as 99 percent of their water though the system using biologically inspired models. Farmers use a combination of physical treatment methods to remove fish waste, such as gravel bed or clarifiers, and biological treatment using edible plants as biofilters and bacteria as denitrifiers to clean the water. As a side benefit, the leafy greens and other crops raised in aquaponics make for a tasty pairing with broiled, baked or grilled fish.

The aquaponics movement is in need of leadership after Jim Rakocy, a professor at the University of the Virgin Islands and champion for aquaculture, recently retired in 2010. Fortunately, there is a new group, Recirculating Farms Coalition (RFC), poised to organize the movement. The RFC has as its aim to “establish(es) a healthy, natural, and community-based way to grow fresh food… [and] to motivate change and build a movement calling for local, healthy, sustainable food” [from RFC website].

The director of RFC, Marianne Cufone, explained in a press release, “The United States is in one of its worst economic situations ever. We need change, now. Building recirculating farms will help address the food and job crises by empowering communities to create new jobs growing their own food, in a way that is healthy for both us and our planet.”

Urban fish farms both large and small are attracting attention for their potential to impact local communities. Walmart recently announced a $1 million dollar grant to Growing Power, a Milwaukee-based recirculating aquaponics farm and nonprofit organization.  Other, less well-known operations that RFC spotlighted recently are also making an impact in their local communities. At his farm, which is tucked behind a strip mall in Winter Park, Florida, Sahib Punjabi raises fresh produce, ornamental fish, and uses the facility as a teaching center (image).

Aquaponics strikes me as a great solution for rebalancing the seafood trade deficit in the United States. I hope that organizations such as RFC will be successful in inspiring investments in aquaponics and other agro-ecological models for aquaculture.