What shall we grow today? Hot Peppers 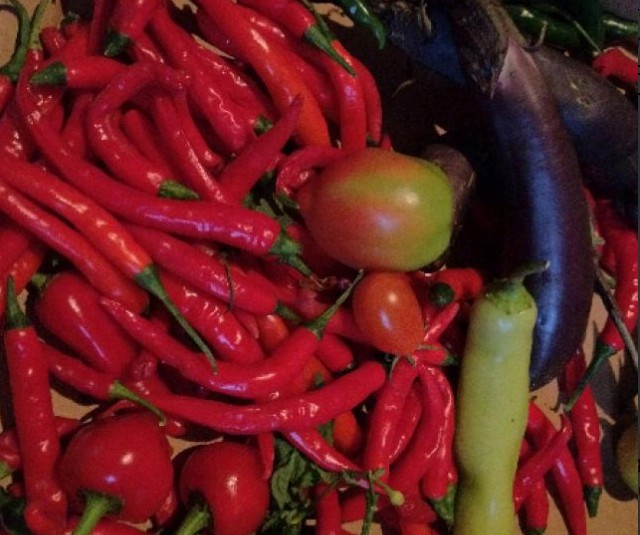 Sahib Aquaponics – What shall we grow today?

A question that I am often asked is “Other than the lettuces and leafy greens, what else can you grow in Aquaponics?” That is then followed by, “Is it profitable?”

During the last two years or so, I have found that you can grow almost any vegetable and plants that you choose to in Aquaponics. You may need to adapt the grow beds and practice hybrid aquaponics as I do to increase your range of products. I have successfully grown broccoli, carrots, eggplants, daikon and radishes, fennel, fruit trees, kohlrabi, herbs, okra, onions, pumpkins, marrows, gourds, tomatoes, strawberries, peppers – hot & sweet just to name some. I have also seen others grow corn and some even sweet potatoes via wicking beds. One really needs to expand their horizon and realize that there are really very few items that will not grow well in Aquaponics systems. Yes there are a few items that are just not cost effective at present such as grains and rice. There is research being done on these products and I am sure that very soon these too will become economic to grow via Aquaponics means. 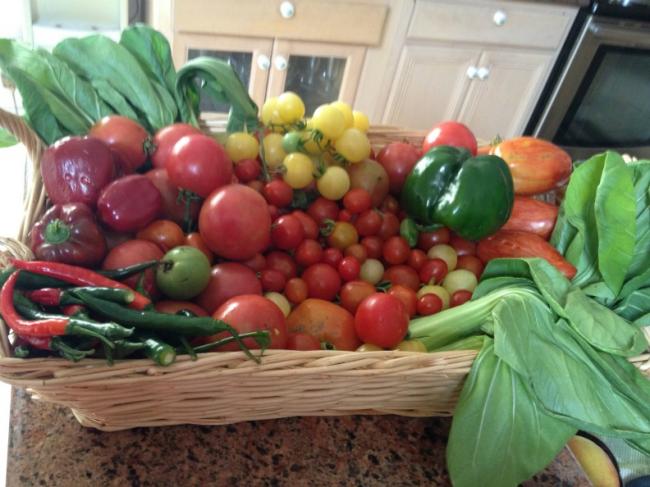 Today I am going to write about one of my favorite items that we grow at Sahib Aquaponics, part of the hot pepper family – Cayenne Peppers. In future posts I will write about other items that we successfully grow in our hybrid aquaponics systems and provide some information as to the benefits of consuming such and recipes of how we cook with them.

“Is it profitable?”  Really!

Let me answer the question “Is it profitable?” first in pure economics terms. According to recent articles (April 17, 2012), “The Top Ten Fastest-Growing Industries in America”, and and “The Hot Sauce Treadmill”, Hot Sauce Production is part of this group! I use a variety of chili peppers (also known as “Mirch” in India), especially Cayenne, in virtually all my cooking and will always have hot sauce handy. Today there are numerous hot sauces on display at various eating establishments. Just look at the supermarket isles when you next visit. This trend is expected to increase as our tastes change and adapt to more of an international cuisine and we build a tolerance to the capsaicin-rich foods. The market is expected to grow close to 5% annually, so yes, growing Hot Peppers can be economically profitable. Growing them by aquaponics means ensures that you are assured the best natural taste. As I was quoted in the recent article in Cornell University Small farm Program Newsletter – the Urban Gardening section “This was a far superior way to grow it locally, grow it naturally, without having to resort to harmful pesticides and fertilizers and such, because if I did, my fish would die.”

As to whether it is “profitable” from a health point of you, this is going to be your decision. Let me help you a little.  I am sure that you are aware of the toxic effects of eating food that has been grown by using harmful pesticides and chemical fertilizers. Growing Chili peppers in Aquaponics, whether Cayenne or one of the other 400 varieties, eliminates the harmful pesticides or chemical fertilizers so prevents this source of toxins to your body. There is considerable research available to you as to the health benefits of eating chili peppers. Cayenne peppers are being used to cleanse and detoxify the digestion system, stimulate blood circulation as well as reduce & naturalize acidity in the body. They are considered to be anti-inflammatory and have “been used for a variety of diseases and ailments including heartburn, delirium, tremors, gout, paralysis, fever, dyspepsia, flatulence, sore throat, atonic dyspepsia, hemorrhoids, menorrhagia in women, nausea, tonsillitis, scarlet fever and diphtheria.” Dr. Edward Group -17 Health Benefits of Cayenne Pepper. They also have excellent nutritional value. “Red chilies contain high amounts of vitamin C and carotene (provitamin A). Yellow and especially green chilies (which are essentially unripe fruit) contain a considerably lower amount of both substances. In addition, peppers are a good source of most B vitamins, and vitamin B6 in particular. They are very high in potassium, magnesium, and iron. Their high vitamin C content can also substantially increase the uptake of non-heme iron from other ingredients in a meal, such as beans and grains.” Now you can see why chili peppers are considered as being an essential item in good health, part of the “Spice of Life” club.

I like the taste of Cayenne peppers so have a preference to using them often. We eat them fresh in salads or add them to my food (green or red), as well as dry them for use later, either as whole or powdered. Indian food just would not taste as good without adding chili peppers (mirch). My daughter has even named her food blog “Love Laugh Mirch”. Now I realize that eating chili’s can be difficult for many who have never had any hot spice added to their food. All I can suggest is, try to add a little hot sauce or fresh chili pepper (remove the seeds at first), to your food. You will soon really start to enjoy the sensation and crave for more. Pretty soon, you too will be advocating their use and growing as many of them as possible. Welcome on board

I was surprised to discover that chili peppers did not originate in India as Black Pepper (also known as “Black Gold”), but in the Americas. Christopher Columbus is credited as being one of the first Europeans to encounter them and called them “peppers” as they tasted spicy and hot, unlike any other food. He thought that he had reached India by sailing west in order to prove that earth was round. How the Chili Peppers travelled to India is still being debated, whether by Portuguese traders, Muslim merchants or Chinese silk merchants. Once they arrived in India, they were welcomed and became part of everyday food and being used in Ayurveda medicines.

In future “What shall we grow today?” article’s I will write about some of the vegetables mentioned above as well some other less known such as Bitter Melon (Kerela), Fenugreek (Methi) and Moringa (Drumsticks). Please let me know if there are any vegetables you would like to grow in Aquaponics and know more about them. You can contact me at sahib@sahibaquaponics.com.