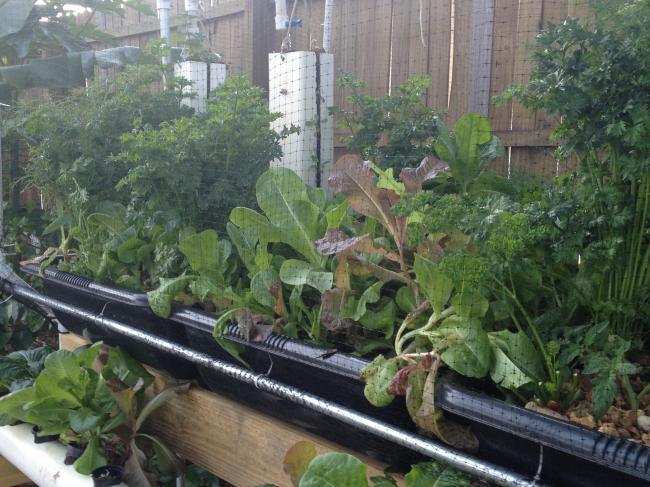 Tim Mann of Friendly Aquaponics recently wrote…"To Sahib what the word “success” means is that most (if not ALL) of the participants in the courses go out,  build and operate aquaponics systems with the knowledge empowered that Sahib has imparted during the course to help end world hunger". Needless to say, I was very happy to read the following e-mail from one of the Workshop participants…

This was the Aquaponics hybrid urban growing system that Sahib shared with the Workshop participants. We introduced two growing methods, one based upon the raft system and the other using media beds. We explained the different medias that could be used as well as explaining them how to mix media to assist in the planting of seedlings. Workshop participants gained hands on experience in the assembly process as well as seeing the complete system operate. They were shown the beauty and functionality of using the bell siphons (we used a modified design based upon Affnan's design), to aid in the aeration process. Workshop participants were requested to assemble a similar Aquaponics hybrid urban growing system and begin to grow food for themselves. Over the course of the next few weeks, we will add vertical towers ("Sahib Sandwich Towers") over the media beds, add an NFT system as well as introduce re-circulating media beds. In due course we will add some containers to be watered on occasions by the fish effluent water. As the fish grow in size or an additional fish tank is added, we will add additional raft beds to dramatically increase the overall growing capacity. The system will be designed to have a canopy to allow shade cloth as well as cover to collect rainwater for recycling. A small solar system will also be introduced so as to be able to operate the complete system off grid. We will post photos as we build and incorporate such additions.

These are the types of systems that Tim Mann was referring to when he wrote… “Sahib is dedicated to “feeding the villages” of the world, are his words for teaching the poorest people in the world how to feed themselves using aquaponics. He is developing Aquaponics systems in Winter Park, Florida, that are the prototypes for affordable systems that will be appropriate for economically disadvantaged and developing nations.” Sahib’s Aquaponics hybrid urban growing systems will be engineered to enable them to be built completely by locally sourced materials as well as complete packages so as to meet different needs and wants. This should ensure that they are affordable systems for the economically disadvantaged, where ever the need is, thus helping provide a sustainable solution to the world hunger epidemic. Water conservation, use of green technology, reducing the carbon footprint while providing a sustainable solution to help develop ecosystems and sustainable living food jungles thus helping reduce, perhaps even eliminate hunger,  are just some of the goals and end results of Sahib’s aquaponics hybrid urban growing systems.

Sahib is using the profits from Aquaponics training workshops by Aquaponics Urban Gurus to fund the development of aquaponics for the poor hungry world villages. He has set up a separate group for this called “Feed Hunger Now” (see link below). Will you help join Sahib…can we work together in this venture? What ideas do you have to help towards this goal?